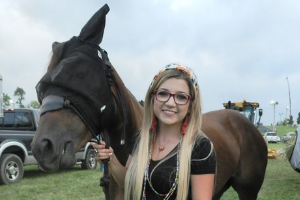 A Beautiful Day for a Barrel Race

At the Jefferson County Fair barrel races on Monday, there was just enough sunshine at 5:30 to feel optimistic. The lighting improved the chances of getting some fine photos of both riders and horses. A day later, folks were grateful that the barrel racers did not have to endure Tuesday’s heavy rain. Barrel racers in general must be prepared for less than ideal conditions in any given arena: deep mud, choking dust, slick packed earth. Today, the girls and young women had a well-prepared surface for themselves and their horses.

The barrel racing competitors without exception, were friendly and entirely open to be photographed with their horses. These eager participants were happy to share their time and information. Most of these young women have enjoyed horses since they were toddlers. They have earnestly studied and prepared themselves and their horses for this athletic event. Barrel racers ranged from a middle-school aged girl to a poised young woman who travels and races professionally to a young mom present with her baby and spouse. In addition, Moms and dads were on hand, providing transportation and moral support. Everyone welcomed this “vintage” writer desiring to honor the riders and their horse and their skills.

I hurried to the arena, seeking an appropriate spot to observe and photograph the action.Soon, a barrel racer’s mom generously smoothed my way, helping me to a truck flatbed. There we enjoyed watching the bull riders and finally the girls. First, we all rose to honor the flag born by a young horsewoman sporting a black cowboy hat. Next, The barrel racers paraded through the arena and then the bull riding began. Punctuated by occasional contests and a bullwhip performance, the bull riders showed their skills and gamely endured brief, rigorous contests with whirling, romping brahmas and other testy breeds. Meanwhile, young women warmed up their horses. The riders carefully soothed the horses’ nerves as each animal grew accustomed to a new venue with unfamiliar surroundings, smells, and sounds.

The barrel racers must be patient at county fairs. Their event is sandwiched between two sessions of bull riding. In the distance just beyond the arena, you could see them ride and prepare their horses. As the sun set, it was hard to see them to best advantage. Furthermore, the stadium lighting made it hard to photograph their action. The first contestant, Madison Yeager, a seasoned rider, quickly achieved the best run of the night—13 seconds and change. One after one, the girls guided their horses around the first two barrels, navigated the third, and then let horses “cut loose” and run at top speed. Here and there, a barrel tipped and rolled away and otherwise good performances had  a five-second penalty added to their final time. Barrel racing is numbers game. No failure is final. It’s back to the barrels back home and training themselves and their horses for success.