Lead us to Himself 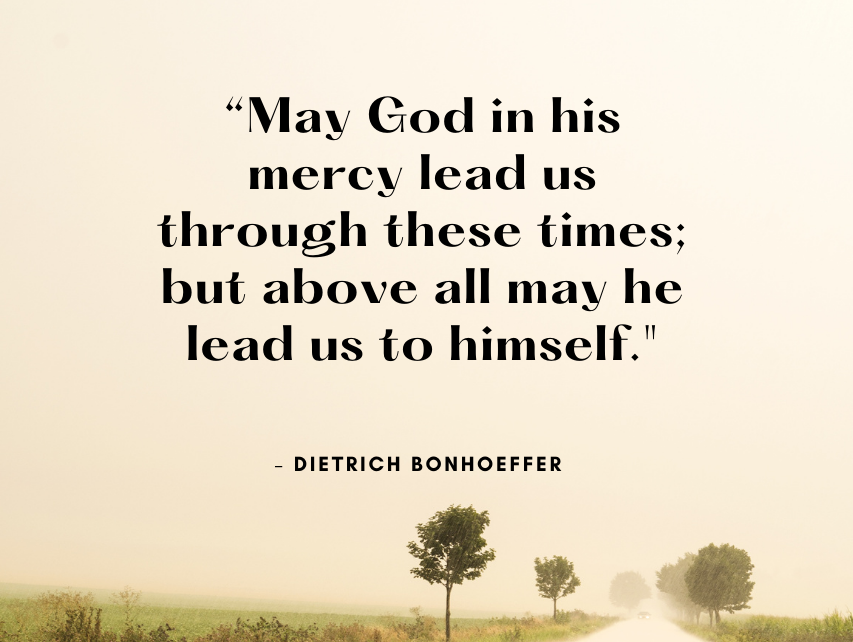 Above all Lead us to Himself

A divided nation with the same plea

On January 6, I was returning in earnest to my writing routine on my author Facebook page, after a lengthy recovery from kidney transplant. I thought I would repeat a Facebook post quoting Dietrich Bonhoeffer, “May God in his mercy lead us through these times; but above all may he lead us to himself.” I truly only had in mind posting something inspirational for weary readers. Our nation is already struggling with COVID-19 and resulting unemployment, hunger, the education dilemma, and homelessness. However, I never anticipated the chaos we would witness at our nation’s Capital.

While I liked the Bonhoeffer quote, it probably received no more than a dozen or so reactions back in October. Here in January, I was shocked as the reactions to the Facebook re-post quickly mounted in the hundreds and then over 1000. In addition, 235 people shared this message. I had never experienced this many reactions to any post in eleven years. Curious, I clicked on the reaction emojis from time to time and accessed a list of people. Hovering over each person’s name, I could see each portrait, and sometimes a statement about them. I was floored at the variety of responders.

A staggering variety of responders

Men and women, Latino, Black, Indigenous People, and White, grandmothers and young moms, retirees and young singles reacted to this post. People from urban Baltimore and rural Oklahoma alike weighed in. I saw reactions from Alaska to Florida, New York to California, and Indiana and Idaho as well.

I saw Trump-supporters and folks who advocated “wearing the mask.” A boy in the eighth grade, numerous high school and college graduates, and a self-described graduate of “The School of Hard Knocks” responded. Professions of every stripe reacted: stay-at-home wives, a farmer, a librarian, a pastor, a USPS worker, an RN, a baseball instructor, a watercolor artist, a BNSF railway worker, business owners, and a man holding down two jobs at “big box” stores.

All these people, despite their differences in convictions or background reacted to a German theologian’s plea. All felt the need for God’s guidance in this turbulent hour. For some, it may have been no more than a foxhole prayer, quickly forgotten. For others, it seemed a part of deeply held conviction. I am talking to this second group. In this time of division, serious Christians need to become a great deal more serious about following God’s guidance.

It is one thing to thing to ask for God’s guidance when you are in a desperate mess, and you want to be rescued from it. You are taking things to a whole new level when you want God to lead you to a closer relationship with Him. Are you intimidated? I am. We ought to be.

When we take on becoming closer to God, we collide with two expectations: That we accept His Word as truth, and that we owe God our allegiance. Jesus once confronted a lawyer by asking him to reflect on what God’s law demanded and the lawyer responded, “You shall love the Lord your God with all your heart and with all your soul and with all your strength and with all your mind, and your neighbor as yourself.” Let us discuss the first half.

Loving God means fearing, serving, walking with Him and keeping His commandments—specifically loving others.

Doing so with our heart, soul, mind and strength means bringing our desires and our future to Him, offering our entire being without limitations, and devoting every possibility or opportunity to serve God.

The lawyer was uncomfortable with the second command: the loving your neighbor bit.  He was looking for a loophole (as we all will) and asked, “And who is my neighbor?” We know the story. Jesus set the high standard of a man who found another naked, beaten, robbed, and left for dead. The kind man chose to sacrifice his time, his money, and his personal safety to rescue this victim. The Samaritan did so despite the fact he and the victim were of different ethnicity, religious beliefs, and historic enemies. I do not need to say what a tall expectation this is for us in this hour.

But wait. Jesus made it even harder in the Beatitudes. He took Old Testament Laws to a heart level.

In Matthew 5: 21-22, Jesus declared that declaring a brother worthless or a fool is tantamount to murdering him. History confirms that hateful propaganda always precedes killing.

In verse 41, Jesus instructs his followers to not resist a hated Roman who could require them to carry his gear for a mile. Jesus told them to shock the occupier by going with him two miles. I wonder if wearing a mask during a 30-minute shopping trip could apply here? Just asking.

Jesus really begins meddling in verses 44-48: “But I say to you, love your enemies and pray for those who persecute you… For if you love those who love you, what reward do you have? Do not even the tax collectors do the same?… You therefore must be perfect, as your heavenly Father is perfect.”

I am not going to discuss the election controversy here. I am less interested in political opinions, than how we who call ourselves Christians treat other people made in God’s image. Jesus let Pilate know that His Kingdom was not of this world and His priority was Truth. He gave us marching orders to spread this Truth in whatever country or government we found ourselves. Furthermore, He assured us that God is in control and He is working with us and in us for His Kingdom’s sake. I am concerned that we have lost sight of God’s priorities and how He wants us to behave. This failure has damaged our credibility as believers.

Truth with a capital “T”

Truth is widely disputed, but I think even in this divided time, we believers have grounds for agreement. On a secular level, as a retired teacher, I suggest sound truth is balanced. For example, it looks at the concerns of both sides fairly. If a source seems to be one-sided, it could also mean it has blind spots. More importantly if a source calls on you to do anything to harm your neighbor or believe anything that otherwise contradicts God’s truth, you know to ignore it.

There has been crushing suffering in almost every corner of our nation. Both peaceful demonstrations and violence have also appeared in these same corners. In his day, the apostle Peter, once abrasive and uncooperative in his own right, had surprising instructions for his flock. “Keep your conduct among the Gentiles honorable, so that when they speak against you as evildoers, they may see your good deeds and glorify God on the day of visitation.” Then he had to go and spell out what this conduct entailed. “Be subject for the Lord’s sake to every human institution.” Doing this good would “put to silence the ignorance of foolish people.” Finally, Peter delivers this troublesome admonition: “Live as people who are free, not using your freedom as a cover-up for evil, but living as servants of God.” (1 Peter 2:12-16).

We know God’s Truth, but how do we even begin to repair shattered relationships and rebuild civil communication as believers? Remember, our credibility is in tatters and we need to get this right.

I suggest inviting such an estranged friend or relative out for coffee. In this more relaxed setting, ask two questions.

What has brought you to your convictions?

What is your greatest fear?

I believe the answers will show we have more in common than we realize.